Who’s On Board 2014: Mobility Attitudes Survey

In 2013, advocates, planners, and policymakers were abuzz with the 10.7 billion rides taken on transit, an all-time U.S. record. Yet the discussion focused too much on the sheer number of rides, without a deep look at the riders themselves, and particularly the changing attitudes that are propelling recent ridership increases. TransitCenter commissioned this survey to take that deeper look. We now have a snapshot into perceptions of transit and neighborhoods in 2014. As Millennials take center stage in American life and the Baby Boom generation confronts retirement, both the transit and real estate industries will have to adjust.
Publication: Who’s On Board 2014

The goal of this study is a definitive understanding of the differences in attitudes and behaviors among the US population with respect to public transportation and neighborhood choice. We aim to understand which characteristics and beliefs are behind those differences. To that end, we conducted a large online survey (11,842 respondents) across 46 Metropolitan Statistical Areas (MSAs) in the United States. The selected MSAs span the full geography of the U.S. and include some cities with well-developed transit systems and others with less developed transit system. The sample also ensured minimum quotas for all age groups, allowing the study to compare different generations, geographies, and neighborhood types.

The results reveal that the most important factors in determining whether someone is at least an occasional transit user are:

Surprisingly, education level and the presence of children in the home do not appear to have a strong association with transit use either way when the other variables are controlled for. This suggests that despite high rates of transit use in college, most former students do not continue to ride transit after that experience. People with kids, meanwhile, may be just as willing as others to take transit when it is available in their neighborhoods.

We are able to explore what factors generally draw people to public transportation. Travel time, reliability, and cost appear to be more important than “flashy” features like Wi-Fi. Additionally, people who are offered pretax transit commuter benefits by their employers are over five times as likely to take transit regularly as employed persons who are not receiving benefits.

The large sample size allows for comparisons across geography, age group, quality of local transit, levels of transit use, levels of population density, and other characteristics. We see the most variation across age groups. Behavior changes considerably along the age spectrum, even when controlling for other factors such as employment, household income, and neighborhood type.

Next City: What Millennials Want From Public Transportation, Sept. 18 2014

“Transit benefits are associated with much higher ridership, even in transit-deficient cities.”

On January 12, 2015 TransitCenter presented the findings from Who’s On Board to The Funder’s Network. Starting at minute 22, the analysis includes how philanthropy and foundations can use this data to inform their role in transportation policy.

Shaping Point A and B

Transit not only takes you from point A to B, but shapes A and B and everywhere in-between. When it comes to living in their ideal neighborhoods, Americans are stuck. Find out what they want and why in our Neighborhood Infographic. 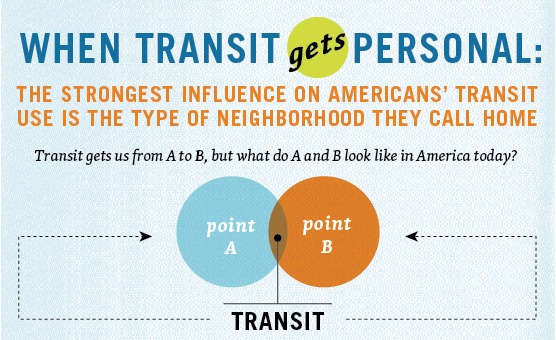 A full appendix, containing tabulations of all the attitudinal questions in the survey, can be found below. The data are broken out by transit quality (progressive vs. deficient) and region in the first set of tabulations and by environment (urban vs. non-urban) and age in the second set.

New York, NY — A first-of-its-kind study about attitudes toward transit use in the U.S. was released today by TransitCenter, a philanthropy committed to improving transit through innovation. The study – Who’s on Board: The 2014 Mobility Attitudes Survey – reveals that Americans from regions coast to coast think about and use public transit in remarkably similar ways.  The report is the first to compare rider and non-rider attitudes by age, income, education, family status and ethnicity, and to examine both cities and suburban areas across various regions of the U.S.

“We commissioned this survey to take a deeper look at the public attitudes which are propelling recent increases in transit ridership,” said Rosemary Scanlon, Chair of TransitCenter and Divisional Dean of New York University’s Schack Institute of Real Estate. “As Millennials begin to take center stage in American life and the Baby Boom generation confronts retirement, both the transit industry and the real estate industry will need to adjust. Who’s On Board offers significant insights for professionals in both fields.”

The survey, the largest of its kind, sampled nearly 12,000 people from a selection of 46 metro areas across the country, including a mix of “transit progressive” cities (such as Miami, Denver, Seattle, and Minneapolis) and “transit deficient” cities (such as Tampa, Dallas, Fresno, and Detroit) revealing several surprising trends about today’s public transit commuters:

“These findings provide concrete evidence of what many of us in the transit field have long suspected: there is a desire for reliable, quality transportation in communities across all regions of the U.S., and among riders of all ages, backgrounds and financial status,” said David Bragdon, Executive Director of TransitCenter. “Unfortunately, this desire is largely going unmet, to the detriment of many local economies. To serve – and attract – residents and workforces today and in the future, cities need to unite land use and transit planning to form comprehensive, innovative infrastructures that can support this demand.”

“Denser, mixed-use places are what most Americans want today, and will demand tomorrow,” said Christopher Leinberger, Chair of George Washington University’s Center for Real Estate and Urban Analysis and president of LOCUS, a national network of real estate developers who support sustainable growth. “High-quality transit can serve as a backbone for exactly this kind of development. While cities and suburbs that marry transit and mixed-use development reap the rewards, those that stick with a conventional suburban approach may find themselves stagnating.”

The report is based on a survey administered online to 11,842 respondents, in 46 Metropolitan Statistical Areas (MSA’s) who were selected and invited to participate based on age and geography (by home ZIP code). The survey will be updated and conducted regularly to track changes in transit rider attitudes and regional trends over time.