Letters from COP21: Advocates show us the path forward for transportation - TransitCenter Skip to Main Content

At the COP21 climate conference in Paris earlier this month, presentations from government and NGO bureaucrats showcasing effective climate change mitigation and resilience strategies were punctuated by the rallying cries of climate advocates. Over the course of the two week conference, panel discussions were disrupted by marches and impassioned questions from citizens seeking to hold governments, corporations, and other organizations accountable for their actions. For the most part, these advocates seek “climate justice”–the elimination and/or remedy of the inequities created by a changing climate.

Beyond the walls of the conference, climate advocates gathered in the streets of Paris as early as the afternoon of December 12th, while the final agreement underwent final edits (it would be signed later that day). Having forbidden public gatherings throughout the conference in the wake of Parisian terrorist attacks in November, French police ultimately agreed to allow two demonstrations on the conference’s final day.

On the spectrum of possible reactions to the soon-to-be final text, the one most clearly on display at the first of those, the “D12” demonstration, remained highly critical of the agreement (indeed, the demonstration was meant to convey the message that organizing for climate justice would continue no matter the actions of heads of state). Criticism of the Paris agreement is certainly merited, and what is an advocate’s role if not to keep pushing for something more, something fairer, something better, something grounded in science rather than steeped in politics?

Yet to this advocate it felt like a missed opportunity to celebrate the substantial impact that advocates have clearly had on this process over the years. What would the Paris agreement have looked like if advocates hadn’t been organizing around environmental issues and climate change for the past several decades? I shudder at the thought.

We need to give national leaders every reason to make much more ambitious commitments at the next possible opportunity. Let’s respond to advocates’ call for more commitments by catalyzing more action.

For transportation, this means that the international policy dialog must move towards what the science tells us: effective transportation greenhouse gas (GHG) mitigation can’t just come from supply-side measures like fuel efficiency and alternative fuels — we must aggressively pursue reducing demand for travel, and making it easy for people to choose mobility alternatives that don’t involve driving alone. To accomplish this, we’ll need to change land use patterns to create ‘complete’ neighborhoods, and invest in robust pedestrian, bicycling, and transit infrastructure. In many cases, structural reforms will be required to overcome decades of counterproductive training and the long-entrenched interests of automobile advocates and fossil fuel companies, whose way of life and business models are threatened by the need for swift and substantial GHG emissions reductions.

And we need to call on national governments, including our own, to explicitly acknowledge the actions needed in their cities — not just those over which nations wield direct influence. While  90 percent of national GHG emissions reduction plans (or INDCs) mention transportation, only 10 percent of 133 reviewed national plans actually propose a transportation sector emissions reduction target. As of November 12, precisely zero high-income countries had made commitments related to urban form or parking reform.

The US commitment mentions transportation only in the context of reducing fuel consumption through vehicle fuel efficiency standards, failing to acknowledge the role of public transportation, biking, walking, demand management, and other potential mobility solutions in reducing emissions. We need to do better, and we can do so only if cities and transit agencies lead the way.

Perhaps recognizing that countries would be hesitant to lead on this front, the international transit trade group UITP created a climate pledge that commits participants to work towards a global doubling of public transportation mode share by 2025, which a number of transit agencies (though only a few in the US) have signed onto. The Lima Paris Action Agenda (LPAA)—the flagship UN initiative focused on city and regional action—only includes one other demand-focused project, “Mobilise Your City”, which aspires to bring integrated urban mobility planning to 100 cities in the developing world.

Beyond transportation in cities, mayors in the US and around the world have put forth climate action plans and signed on to the Compact of Mayors. A growing number of cities are taking their commitments a step further by joining the Carbon Neutral Cities Alliance and pledging to achieve an 80 percent emissions reduction by 2050, at minimum. New examples of city leadership on climate change appear almost constantly — just last week, for example, cities from across the US signed onto a legal brief in support of the Clean Power Plan.

If we are lucky, all of these efforts will add up to create an emissions reduction moon race among cities — the kind of [friendly] competition that spurs new thinking and experimentation. We’re seeing this (and hopefully seeding it) throughout our work in cities across the US.

The City of Paris itself points towards many of the foundational improvements that cities around the world can make to reduce GHG emissions and improve citizens’ well-being through improved urban mobility. For example, I never waited more than five minutes for a train, whether the Paris Metro or the RER commuter rail. When the shuttle bus from COP21 was rerouted to avoid an unexpected metro stop closure, it also picked up a hoard of Parisians whose travel had been interrupted by the same issue and helped them get where they were trying to go, a rapid and flexible response to a problem that did not care whether those affected were attending the climate conference.

Walking around Paris, you seem to stumble upon Vélib stations every few blocks—and Parisian residents wielding Navigo smart cards can use those cards with equal ease to take the train or to rent a bicycle (just as Los Angeles is hoping to do with its planned bikeshare system). Once you get on a bike, protected bike lanes are common, and shared taxi/bus/bike lanes are offered on major streets almost as a bare minimum in the central city. Counterflow bike lanes are common as well. I even encountered a bike lane that had been completely re-striped in light of construction taking over its original path (that didn’t stop a utility van from parking in the same bike lane 50 feet down the road, however—some problems are apparently universal), addressing a problem that Steven highlighted on our blog in September.

These people only *think* they are on a cruise in the antarctic, avoiding untold GHG emissions from international maritime travel

But while cities are key actors, they can’t go it alone—a newly released report from the C40 Cities Climate Leadership Group finds that nearly 75 percent of the climate change challenges facing cities can only be addressed through collaboration, whether with businesses, NGOs, other levels of government, or other civil society organizations. So while mayors and their cities’ political commitments have been the focus of the sustainable cities dialog, they are just the tip of the iceberg. At TransitCenter, we believe in the power of mayors to effect positive change—but mayoral leadership can also come and go, so sustained city leadership is often only as strong as the city’s civic champions outside of city government, as we discuss in detail in our People’s History report.

Besides targeting concrete, catalytic actions in cities, there is also a place for foundations and other civil society actors like TransitCenter to take symbolic actions, like divesting financial holdings from fossil fuel companies. In this vein, TransitCenter has joined over 1000 (and counting — get your organization signed up here) non-state actors in signing onto the Paris Pledge for Action, in support of immediate climate action in support of the international agreement. 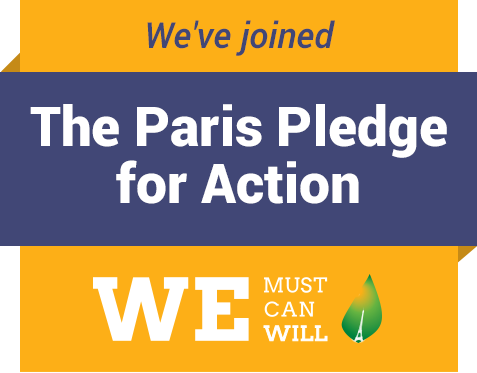 While you don’t often hear us talk about sustainability and climate change, in large part that’s because the benefits of public transportation are so much broader — but this doesn’t make us less of an ally to the climate change movement. We have to an extent internalized a philosophy of “if you build it (good transit infrastructure), they (GHG emissions reductions) will come”. Indeed, win-win opportunities like transit investment may be climate change mitigation’s strongest ally.

We hope you’ll join us in challenging American transit to respond to the call of this global challenge. If we want to see more ambitious commitments from the US federal government in the coming years, we need to empower city leaders to take bolder action in public transportation, using all the institutional, political, and financial tools at their disposal to make change.

The Paris Agreement was never meant to provide detailed guidance on how to achieve the ambitious emissions reductions targets that its nearly 200 signatories have laid out for the world to pursue. But the agreement itself serves as a call to action, and by responding together cities in the US and beyond can help build a sustainable path forward. Let’s make it easy for our cities’ residents to travel that path on foot, by bicycle, on transit, or perhaps even in a shared electric vehicle.

TransitCenter has joined L’Appel de Paris / the Paris Pledge for Action to support the global call from cities, businesses, and civil society groups for a credible, coherent and unmistakable signal that the Paris Agreement will be implemented and commitments met, or even better, exceeded. We urge other civil society groups, businesses, and cities to also call for action and sign the Paris Pledge for Action.