The 2018 figures for American transit agencies are in, and the ridership emergency is far from over. Last year, in the vast majority of cities, fewer people rode buses and trains than the year before. The drop remained alarmingly large in major cities like New York, Chicago, and LA.

But within the wider trend, there is cause for optimism: More agencies and city governments are showing how to escape the cycle of ridership loss and get people back on transit. Ridership rose in seven of the 35 regions with the highest transit usage, compared to just four the previous year.

These stats come from the National Transit Database (NTD), which recently released the 2018 ridership numbers submitted by America’s transit agencies. TransitCenter has consolidated the raw ridership data from different agencies into region-by-region statistics. Readers can review the annual ridership data for 150 regions going back to 2002 in this spreadsheet.

TransitCenter’s recent report on transit rider travel behavior, Who’s on Board 2019, found significant variation between cities when it comes to changes in ridership. Reviewing the policy and practice of places where ridership is on the rise can help illuminate the path forward for transit agencies and local governments struggling to retain riders.

Looking at the 2018 NTD data, of the top 35 regions for transit usage, ridership is rising in Seattle, Pittsburgh, Houston, Austin, San Antonio, Detroit, and Las Vegas. Patterns clearly emerge when examining these cities. (Note that this visualization excludes data from New York, where swings in ridership are of a different scale than other cities.) 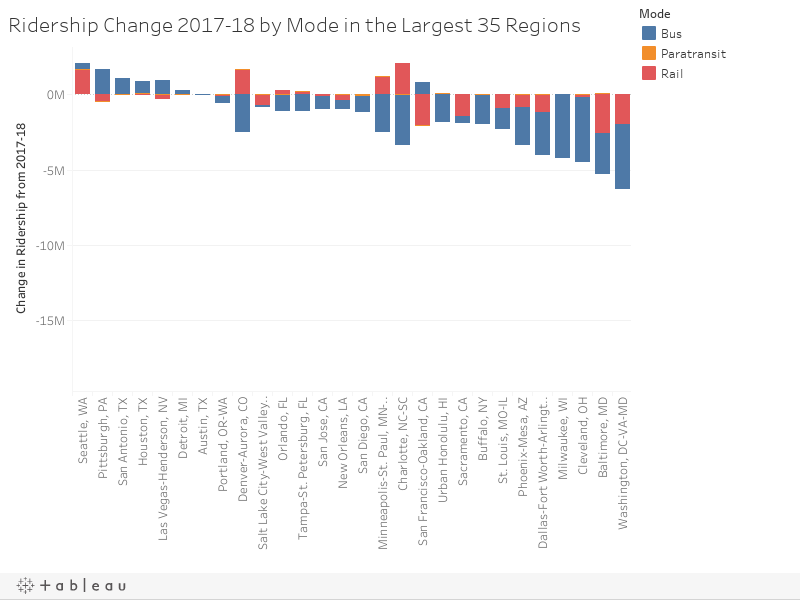 In almost every American city, bus service carries the majority of trips, so it should be no surprise that cities have to improve bus service to grow ridership.

Three of the seven cities with growing transit ridership have recently re-oriented their bus networks to meet changing demand: Seattle, Houston, and Austin restructured service to provide more frequency. Another three — San Antonio, Las Vegas, and Pittsburgh — have substantially increased service since 2013. Outside the 35 biggest transit regions, Columbus, Richmond, and Indianapolis are also gaining ridership after revamping their bus networks. Bus ridership in Las Vegas is rising faster than the temperature

Detroit expanded frequent service on 10 of their busiest routes by adding 500 trips a week and running them 24/7.

San Antonio also made a huge push to outfit 1,000 bus stops with shelters and ADA-accessible sidewalks — improving the all-important pedestrian component of riding the bus for 95 percent of trips riders take on the system.

The transit crisis in America’s biggest cities is not abating.

Of the top seven regions for transit usage, only San Francisco avoided another year of drastic ridership loss (it had mild ridership loss instead, with construction work on the Twin Peaks tunnel depressing rail ridership).

Factors vary between cities, but shared challenges include the need to rehab and upgrade high-capacity rail lines while providing good substitute service during construction, as well as worsening street congestion. In large downtowns where Uber and Lyft are exacerbating traffic jams, widespread deployment of strategies to improve the speed and reliability of surface transit, including bus lanes and signal priority at intersections, should be an urgent public policy objective.

One thing San Francisco has going for it is that it’s the only American city with citywide all-door bus boarding. Notably, bus ridership is rising in San Francisco.

Investing in transit isn’t enough, you have to spend on the right priorities.

Denver spent billions on its FasTracks light rail network extending far into the suburbs, with too much track mileage running in areas with low population density and too many stations surrounded by parking lots. Public officials have done little to improve the city’s bus network, which serves the urban core of the region where ridership potential is highest. In 2018, modest gains in rail ridership were swamped by losses in bus ridership.

Los Angeles’s recent record of rail expansion is more of a mixed bag, but the region has likewise let its bus network stagnate and failed to prioritize surface transit.

The takeaway is not to prioritize one mode over another, but to align transit capital spending and service planning with a region’s transit needs. Transit agencies and cities must invest in new capacity where population and jobs will propel ridership gains. They also need to think at the level of the network — improving one or two transit routes in isolation is not going to cut it.